Far From Home is the latest New England IPA (NEIPA) from Elias Wicked Ales & Spirits and is the first “new” beer from Team Elias with their Head Brewer Raoul Masangcay joining them via Zoom all the way from Virginia during brew day.

Far From Home features dry-hop additions of Citra, Mosaic, and Topaz together with high protein malts.

This beer is being evaluated as a Specialty IPA: New England IPA (21B) in the context of the provisional guidelines of the Beer Judge Certification Program (BJCP) for the said beer style. The most current version of the guidelines can be found on the BJCP website.

Hazy pale straw, medium white head. The aroma opened up with partly ripe mango peel with a hint of tangerine citrus. Appropriately medium-full in body, medium in carbonation. Smooth; no warming alcohol notes and no acidity. The flavor profile is hop-forward as expected from the style: partly ripe mango, light lime peel; has a “juicy” quality despite sweetness being very low. Malt character felt neutral; fermentation character was not explicit. Bitterness is medium-high but well-integrated; piney and resiny. Finished slightly dry as the piney-resiny bitterness lingered together with the familiar mango peel. 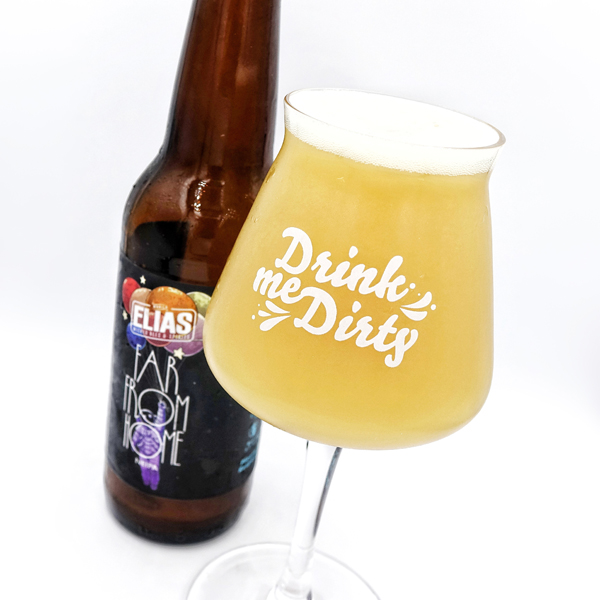 Outstanding. The New England IPA took the craft beer world by storm and has since garnered countless interpretations that cater to different drinkers. Far From Home brought us back to a time when NEIPAs were not associated popularly with fruit purees and noticeable lactose addition. It is hazy, hop-forward, and juicy with a semi-dry finish. The “juiciness” was achieved without diluting the hop bitterness and the presence of overwhelming sweetness.

Far From Home is reminiscent of the earlier versions of Far Far Away Galaxy, a NEIPA we consider the “breakthrough beer” of Elias in the Philippines. It was mainly the mouthfeel and the semi-dry (or “off-dry”) finish of Far From Home that reminded us of such. Compared to All Together– the NEIPA the brewery released as part of the global brewing fundraiser, #AllTogetherBeer– Far From Home has less of the fruity-floral qualities and more mango and lime peel. Further, this hazy beer is less potent and less citrus-forward relative to the Intergalactic 2.0 Double IPA.

This is a stellar job by Raoul and Team Elias– more impressive considering this was done virtually. We do hope Far From Home becomes a consistent offering from them.