Kuroshio No Gotoku (黒潮の如く) is an interpretation of a “Belgian Stout” by Kyoto Brewing Co. in Japan. Named after Kuroshio Current, the strongest in the world, this beer was fermented using a Belgian Ale yeast strain and features a diverse malt bill that includes Maris Otter, Malted Oats, Crystal DRC, Chocolate, and Black malts among others.

This beer is being evaluated as a Mixed-Style Beer (34B) with the Foreign Extra Stout (16D) as the base style in the context of the 2015 Beer Style Guidelines of the Beer Judge Certification Program (BJCP). The said guidelines were used since we reviewed this beer before 29 December 2021, the date of publishing of the 2021 update. The most current version can be found on the BJCP website.

Clear deep brown; medium-sized tan head with good retention. The expected malt-forward aroma manifested as moderate, combining dark roast coffee with dark chocolate and muscovado sugar. Beyond this, an indistinct blend of fruity, herbal, and earthy scents reminiscent of Sibut, coconut, and coriander were noted. Medium-bodied; moderately low carbonation. As to flavor, roasty dark coffee and chocolate were at the forefront with low earthy, muscovado sugar, and herbal notes present in the background. Indistinct fruitiness was again noted but subtly. Medium-low bitterness and sweetness. Chocolate and herbal flavors lingered thereafter. 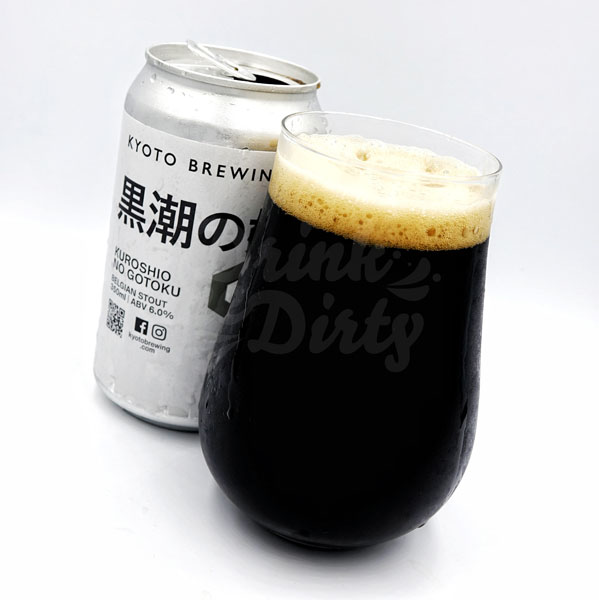 A “Belgian Stout” is not an explicit or official beer style, but it is a stout (e.g., Foreign Extra Stout) fermented with an expressive Belgian yeast strain. Other sources have also noted that adjuncts such as dark candi sugar can be used in brewing these Belgian variants to increase ABV, darken color, and lighten the body for “digestibility.”

We expected this “Belgian Stout” to be a spicier, drier, fruitier stout as with Belgian IPAs (IPAs fermented with Belgian yeasts) and reality was not far from our expectations. In particular, Kuroshio No Gotoku showcased the expected dark and roasty malt profile of a stout, but also had the dryness as well as herbal, earthy, and fruity qualities of a Foreign Extra Stout. A spice-like character also added to the complexity. All in all, we think Kuroshio No Gotoku  is a excellent interpretation of a “Belgian Stout.”