This beer is being evaluated as a Mixed-Style Beer (34B) combining Specialty Spice Beer (30D) and Specialty Wood-Aged Beer (33B) with the Imperial Stout (20C) as the base style, in the context of the 2021 Beer Style Guidelines of the Beer Judge Certification Program (BJCP). The most current version can be found on the BJCP website.

Slightly hazy ruby brown, almost black; medium low brown head with fair retention. The nose opened up with a moderately high medley mainly of ripe lychees, caramel, chocolate, whisky, and vanilla. Mouthfeel could be described as medium-full in body with a moderately-low carbonation, and subtle astringency likely from the barrel-ageing. Dark roasted malts (e.g., coffee, cacao nibs), fruit esters (e.g., grapes, lychees), whisky, and oak were the most dominant of flavors at moderately high intensities. Some caramel/toffee, and vanilla were also noted. Medium-high bitterness, low sweetness; this Imperial Stout lingered long with malty cacao, boozy whisky (but not hot), oak, lychees, and spice-forward gingerbread but all without the sweetness. 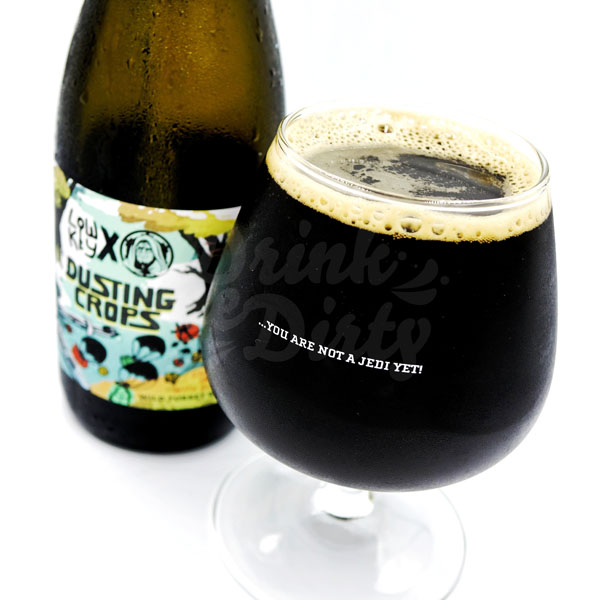 Dusting Crops BA Wild Turkey is relatively dry, thin in body, and drinkable for a barrel-aged Imperial Stout. Do not let this fool you; it still is a highly potent dark and roasty ale at 11% ABV. The influence of the barrel-ageing process, manifesting as whisky and wood impressions, was quite evident. This quality was more notable as this beer warmed up.

For Wild Turkey aficionados, the flavor is quite distinct. Tonka is not familiar to us, but vanilla was notable. A wee bit of sweetness could enhance this beer further, but we think this is already an excellent beer.