Defeat the Rancor is a maple and pecan Danish pastry Imperial Stout brewed by Neon Raptor Brewing Co. in partnership with Emperor’s Brewery. This beer was brewed with lactose.

This beer is being evaluated as a Alternative Sugar Beer (31B) with the Imperial Stout (20C) as the base style, in the context of the 2021 Beer Style Guidelines of the Beer Judge Certification Program (BJCP). The most current version can be found on the BJCP website.

Pours an opaque dark brown liquid almost black; very thin brown head. The aroma profile was moderate and could be described as peanut butter-like or pecan with complementing notes of maple syrup, graham crackers, and vanilla. Medium-full-bodied, low carbonation with a slightly syrupy mouthfeel. Defeat the Rancor unveiled a very sweet flavor profile with notable sugary/caramel/toffee and maple syrup impressions against a soft backdrop of a roasty malt. Subtle nutty and lychee flavors were also noted. Medium bitterness surfaced secondarily to the mentioned sweet flavors; the finish echoed the pastry-inspired flavors of maple syrup, chocolate, and toffee. No alcohol. 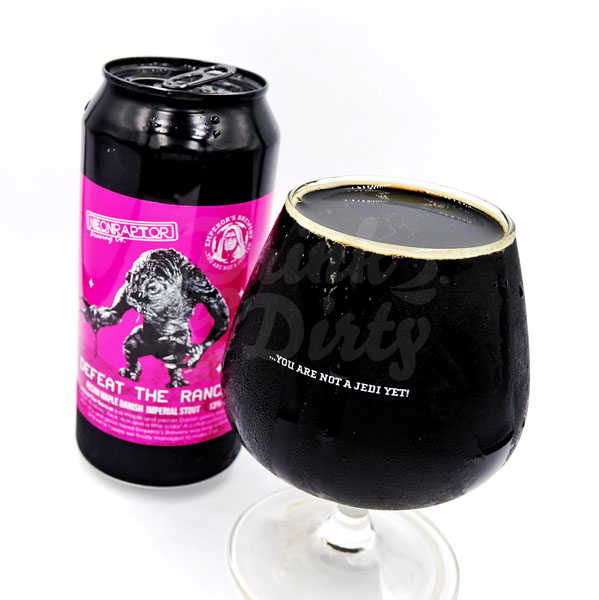 Benchmarked as an Alternative Sugar Beer with Imperial Stout as the base style, Defeat the Rancor is a “Pastry Stout” that unleashed nutty, maple syrup, vanilla, and chocolate themes in a sweet manner. We would personally prefer more roasty bitterness and slightly tempered sweetness to keep things grounded, but this pastry stout is just what it was advertised as and was done without any alcohol burn. Overall, very good. Share this with friends.