The First Triumvirate is an informal alliance among three names in the Philippine alcoholic beverage industry created in 2019 A.D. to bridge a proud heritage of five generations of master blenders and a young craft brewery that seeks to go against the tide. Two-thirds of the triumvirate, Destileria Limtuaco and Elias Wicked Ales & Spirits are two contrasting companies established more than a century apart, yet share surprisingly similar narratives.

Maximus, the first under this passion project, is an Imperial Stout brewed by Elias head brewer, Raoul Masangcay. This Imperial Stout was rested for six months in an ex-brandy barrel from the country’s oldest distillery. Clocking in at 11% ABV, this beer represents this alliance and the insatiable curiosity to explore the mysteries wood and alcohol have to offer.

Established in 1852, Destileria Limtuaco & Co., Inc. is the oldest distillery in the Philippines. The distillery was founded by Lim Tua Co, a Chinese immigrant born of a merchant family in Amoy, China. He sailed to the Philippines in 1850 with the blessings of the Chinese emperor and with a secret formula for a medicinal wine that has been with his family for five generations.

Two years upon his arrival, Lim Tua Co set up a distillery at 135 Gandara Street, Binondo. He began producing Vino de Chino, which is a bittersweet brew derived from different Chinese herbs. This brew became widely known as Sioktong, which is now the colloquial term for any locally-made medicinal wine. With his success, Lim Tua Co was hailed a leader in the Filipino-Chinese business community and in the distillery trade. He then completed his integration into the Filipino life upon taking on the Christian name, Don Bonifacio Limtuaco.

Fast-forward to the 21st century. Currently, Olivia Limpe-Aw heads the company and represents the fifth generation. Appreciating its heritage, the company’s current management balances the wisdom gained from its predecessors vis-à-vis the utilization of modern-day advantages for competitiveness. The company now maintains a very diverse product portfolio that includes whisky, brandy, gin, rum, and herbal wine among others. Early on in the COVID-19 Pandemic, Destileria Limtuaco stayed ahead of the curve as it pivoted swiftly to Ethyl alcohol distillation to address the shortage in the country.

Raoul Masangcay is an engineer who lived and worked in Virginia. An avid homebrewer, a Certified Cicerone (a beer sommelier), and a Beer Judge Certification Program (BJCP) Certified Beer Judge, Raoul is very passionate about this side of his life. He competed in a lot of homebrew competitions in the United States and even managed to bag a few medals along the way. Today, he still names his Bière de Garde as one of his proudest creations.

With his favorite brewing recipes at hand, Raoul was on his way to opening up a craft brewery– but not in Virginia. With the blessings of his family, he gave up his lucrative day job as an engineer and traveled thousands of miles (via airplane) to return to his motherland. Here, he opened up Elias Wicked Ales & Spirits at 13 Ubay Street, Banawe, Quezon City. Raoul did not only focus on the brewing technicalities but also had to get to grips with running a company from scratch.

As a brewer, he was always busy attempting to create the best versions of his recipes given the constraints. While as an engineer, Raoul endlessly sought ways to improve continuously his brewing efficiency and beer quality. At the time of its inception in 2018, Elias was operating at 1,000 liters per month. His succeeding expansions, including the acquisition of Belale, Inc. in Parañaque, have since increased his brewing capacity to 7,000 liters a month of various styles of craft beer and ciders.

The COVID-19 pandemic saw Elias respond on two fronts. First, Raoul closed temporarily his two breweries in Quezon City and Parañaque to focus on distilling 70 percent Ethyl alcohol to distribute for free to those who needed them the most. This was his response to the ongoing shortage of alcohol sanitizers early in the lockdown periods. Second, Elias participated in #AllTogetherBeer, the global brewing collaboration spearheaded by Other Half Brewery (New York) to raise awareness and relief for our brothers and sisters from the hospitality industry struggling due to the pandemic. Raoul chose Unicef as the beneficiary of this effort.

Rome Was Not Built in a Day

As the old adage goes: Rome was not built in a day. This does not only applies to the actual maturation period these beers spend in barrels but also refers to the patience required from the brewers. Perfecting barrel-aged concoctions cannot be achieved overnight. Brewers will need to learn and experiment continuously to harness fully the secrets these vessels have to offer.

Our vision as barrel-aged beer enthusiasts, which is also shared with others, is for barrel-aging programs to flourish in the Philippines. The goal with Maximus was to show that these programs that bring together century-old distilleries and young craft breweries can result in something worthwhile. More importantly, we want Maximus to be a reminder that something like this can be done here in our own country. With this passion project, we hope more Philippine distilleries appreciate the value these programs provide and eventually bridge the gap to more local craft breweries. 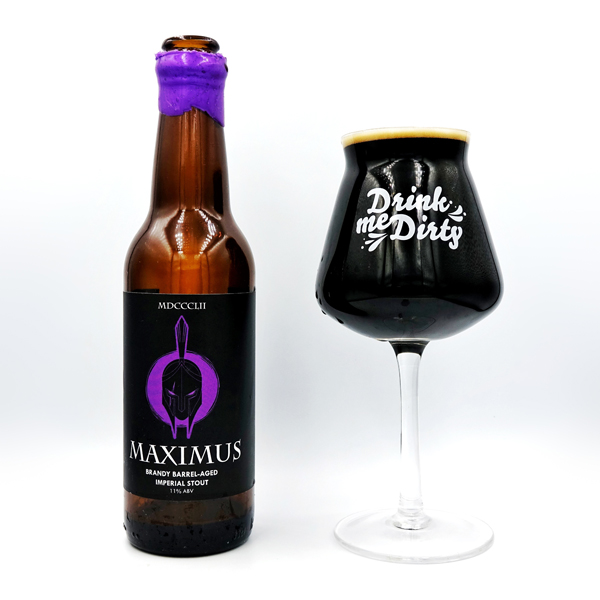 This beer is being evaluated as a Specialty Wood-Aged Beer (33B) with the Imperial Stout (20C) as the base style in the context of the 2015 Beer Style Guidelines of the Beer Judge Certification Program (BJCP). The most current version of the guidelines can be found on the BJCP website.

Maximus is an opaque dark brown beer, which approaches black with less light. The initial pour reveals a foamy brown head, but this settles down after a while. Aromas of Chinese preserved plums blend with light licorice, wood, and some indistinct spice tones.

With a medium-full body, Maximus feels slightly lighter on the palate relative to the other classic Imperial Stouts. Wine-like attributes such as tannins and dryness were also noted. Carbonation is moderately-low. Dark fruit tartness (think of a blend of purple grapes, lychees, and plums) compose primarily the flavor profile. These fruit-like flavors are supported by roasty cacao and coffee-like malt characters, with a moderately-low bitterness. No alcohol or hot solvent-like notes were detected despite this beer weighing in at 11% ABV. The aftertaste: very dry and puckering with lychees and grapes. 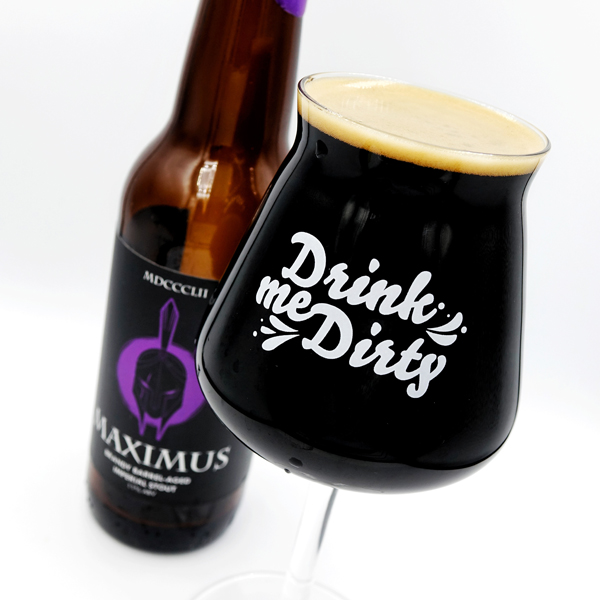 As of this writing, Maximus is a barrel-conditioned Imperial Stout that highlights primarily dark fruit esters and wine-like attributes. Compared to a cognac/brandy barrel-aged beer of the same style we have tried recently from Catalunya’s La Calavera, Maximus shares similar characteristics such as dark fruit and licorice. While the mouthfeel, carbonation, and body are also noted to be alike, Maximus is, on the contrary, less sweet, roasty, and malty.

Overall, we think this beer is something worth talking about. The next batches could have a more robust and roasty malt backbone and could also be aged longer in the barrel.  As with other high alcohol barrel-aged beers, Maximus will develop further in the bottle if stored properly. With that said, drink one now, take down notes, and open another in a year or two.