Christmas is indeed the most wonderful time for a beer. To help everyone get in the Holiday mood, we will be covering Christmas-themed beers from our friendly neighborhood breweries in a series of features. In this first volume, we take a look at this year’s Christmas Beer by Mitchell’s Backyard Brewery alongside the Bisperas Peppermint Stout by Banayad Craft Brewery. 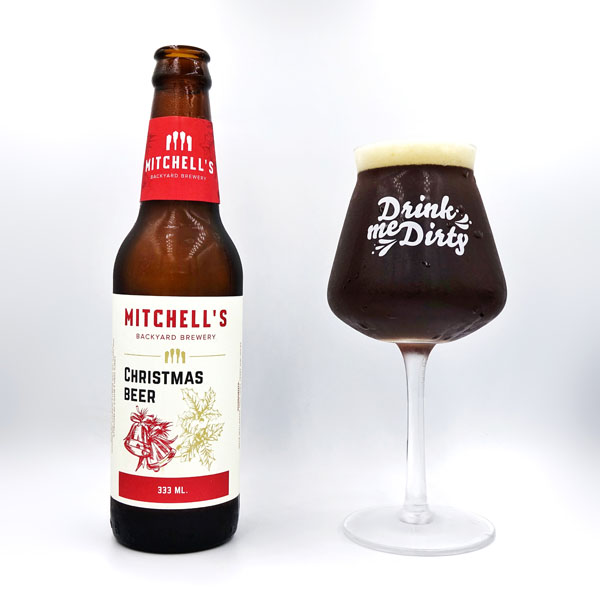 It is definitely a festive few months for Mitchell’s Backyard Brewery after bringing home a gold medal for the Stout category in the recently concluded Asia Beer Championship 2020. What better way to jumpstart the festivities than by enjoying their 2020 “winter warmer” seasonal.

This beer is being evaluated as a Winter Seasonal Beer (30C) with the British Brown Ale (13B) as the base style in the context of the 2015 Beer Style Guidelines of the Beer Judge Certification Program (BJCP). The most current version of the guidelines can be found on the BJCP website.

Clear medium amber with a foamy tan head. The aroma is nostalgic, evoking memories of waiting for dessert in the kitchen during Noche Buena. Think of cinnamon, gingerbread, marmalade, and hints of caramel and raisins. The palate suggests a beer that is light-medium in body and is moderately carbonated. Softly sweet and toasty biscuity malt characters are at the forefront with a dash of Christmas-themed spices such as cinnamon. Low bitterness; subdued earthy hop character. The light biscuity malt characters linger a bit.

We think this is best enjoyed not too cold for the aromas and flavors to flourish. Christmas Beer is light and drinkable suggestive of something you can bring to the table during Noche Buena but still has that softly sweet biscuity malt characters to back it up. Very good. 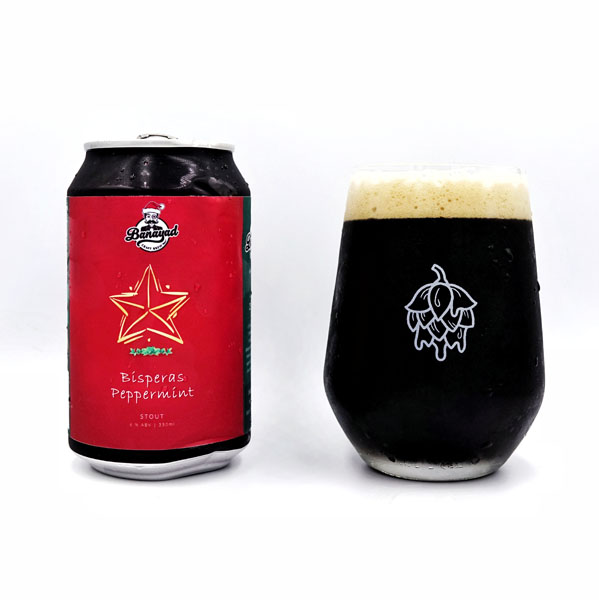 Bisperas Peppermint is the first of several Christmas beers lined-up from the Manila-based Banayad Craft Brew. This is an Oatmeal Stout that features peppermint, cacao nibs, and lactose. “Bisperas” is the Filipino translation of “Eve” and is used typically to refer to Christmas Eve.

This beer is being evaluated as a Spice, Herb, or Vegetable Beer (30A) with the Oatmeal Stout (16B) as the base style in the context of the 2015 Beer Style Guidelines of the Beer Judge Certification Program (BJCP). The most current version of the guidelines can be found on the BJCP website. Although lactose is present (see Sweet Stout (16A)), it was not that noticeable.

Partly clear, ruby brown, foamy brown head. Prominently peppermint and some dark chocolate character on the nose suggestive of a Peppermint Frappuccino. Medium-bodied; moderately carbonated. Subtle chocolate and oat-like flavors surface against a modest dark toasty backdrop. Peppermint stands out, but the overall sweetness is a notch below medium. The aftertaste exhibits the familiar: peppermint alongside malty and chocolatey notes.

In our opinion, while the appearance and aroma profiles are strengths of this beer,  Bisperas Peppermint Stout needs a more robust backbone (e.g., oaty, coffee, and/ or darker malty flavors) and a more fortified body. The presence of peppermint, however, appears to be sufficient. The Sweet Stout route can also be explored with more noticeable additions of lactose. As with the first beer, this one is best enjoyed not too cold.